What is the difference between Epilepsy and Seizures? 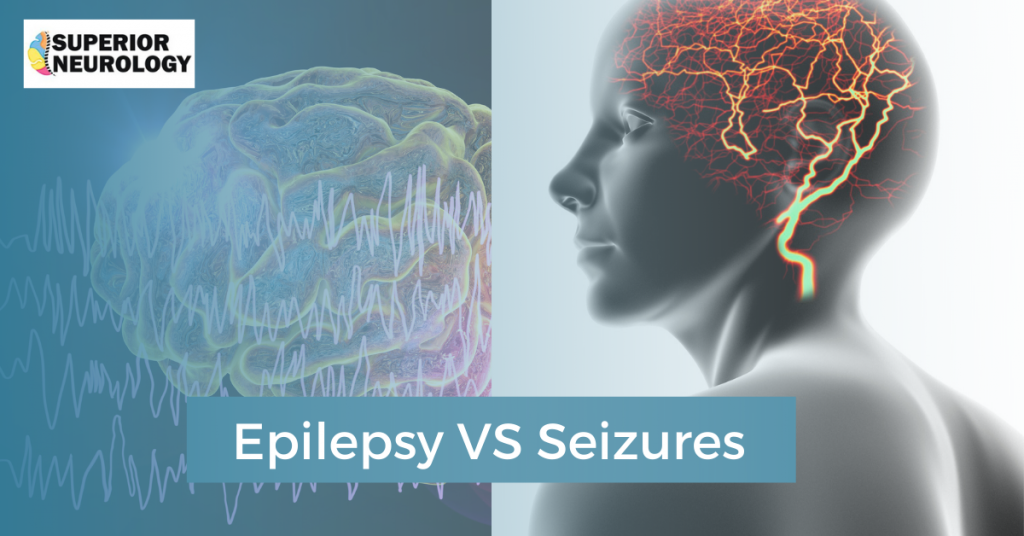 Although the advancement in technology in terms of research in the medicine and health sector has improved the quality of life, still certain disorders are very common across the globe. Among neurological disorders that affect our central nervous system and peripheral nervous system, seizures and epilepsy are worth mentioning as epilepsy is considered the fourth most common neurological disease. According to USA statistics, about 1 in 2 people suffer from epilepsy, and about more than 15000 new cases of epilepsy are diagnosed yearly.

Thus, it is better to have a complete understanding of these neurological disorders. Mostly these two neurological conditions i.e., seizure and epilepsy are considered somehow the same or interchangeable. People confuse these two but actually, the difference is a bit more complex than that. Let’s explore the key differences between the two.

There is a complicated and intricate network of billions of neurons in the brain that are continuously processing and transmitting information by interacting with one another for the normal functioning of the brain and body. Sometimes these neurons start sending the wrong signals or interact with few disruptions resulting in sudden electrical discharge causing changes in sensation, muscle twitches, or altered consciousness.

Single neuron misfires with little consequence but if the multiple cells start misfiring at the same time depending on the severity and location of the brain, it will lead to a seizure.  The cause of disruption of function can be due to high fever, trauma to the head or lack of oxygen. There are only 10% chances of suffering from a seizure but the risk increases if the patient has a history of some severe brain injury or stroke. However, not all seizures are epileptic in nature.

Depending upon the movement, changes in sensation, behaviors and effects, seizures are divided into the following types

It may take the form of simple jerking in one part of the body or simple tingling or numbness lasting for one to 2 minutes. Patients might experience sudden distortion of vision or hear some strange sound, feeling of some sensation coming out of their body. In the case of children, they get confused, disoriented for no apparent reason, and after few episodes patients will become completely normal. When patients have these kinds of manifestations without the loss of consciousness or for a very brief time it is called partial seizures.

In contrast to partial seizures, there are generalized seizures in which electrical activity is going to spread from one particular area and spreads to the entire area of the brain. Patients would have an initial grunting sound followed by the clenching of jaws very tightly; bite their tongue, frothing might come from their mouth and whole body become very stiff. Following this, after few seconds, jerking starts in their arms and legs. The whole episode may last for about 1-2 minutes, slowly the jerking stops and the patients start breathing heavily.  Their movement may stop but the patients become disoriented, confused, and lethargic for few minutes to one hour. Then they will recover completely from it as nothing has happened. This is called the major motor seizure or generalized seizures.

If the patient suffers from repeated and unpredictable episodes of seizures without any provocation that is known as epilepsy. There are multiple types of epilepsy, which we will require a subsequent, separate discussion.  Single seizure episode happens only once, most of the time an epileptologist may decide to just observe the patient but when it happens as an epileptic manifestation, these patients need to be under the treatment.

But sometimes despite the best efforts of epileptologist, around 20% to 30% of patients may not respond to these medications. In that case, the patients have to be evaluated for some surgical procedure. The epileptologist and the neurosurgeons discuss all the available options for the patients to control their epilepsy. In many cases after a successful procedure patient might recover completely from epilepsy but this is not an option for everyone.

According to the Centre of Disease Control and Prevention, certain things need to keep in mind when anyone around you is having a seizure

Thus seizure is a one-time thing while frequent episodes of it are known as epilepsy. Epilepsy is not a stigma and it can be cured. Due to the latest research and treatment strategies in the medical field, now epileptic patients can live an independent and normal life. If you need further assistance with either condition, contact our Neurologist doctor today!